I did another great find on Marktplaats: a Rotel RB-970BX. This is a power amplifier, meaning it has no volume or tone controls whatsoever. You’d normally pair a RC-970BX pre-amp with one or two of these power amplifiers.

The amp can operate in stereo at 60W per channel or in bridged mono for up to 180W of power. In bridged mono you can use the entire amp to amplify either the left or right channel to a single speaker. Of course, for stereo, you’d need two of these amplifiers in your setup.

I bought this amp with the remark that one channel did no longer produce any sound. This Rotel amp was a complete unknown to me, but my guess was it’d be easy enough to fix.

Before powering up an unknown device I always take of the cover and do a visual inspection. This amp looks really clean and lightweight. There’s not a single IC in there! I checked for any obvious failures, like buldging capacitors, fried resistors or burn marks on the PCB. Nothing looks out of ordinary, so that means there’s a possible issue with any one of the transistors on the board.

The power transistors, those mounted on the heatsinks, are prime candidates for failure due to the thermal stress they get. With my multimeter I did a quick continuity test to see if any of these were shorted out - all appear to be fine.

Another quick test I performed is verifying the bias resistors (the large white ones). These are high power, low resistance. All measured in spec at around 0.22Ω - so no open or short circuits there either.

Next I powered up the amp for the first time - with nothing connected to it. I measured for DC on the outputs but both were in the mV range. Right was close to 0V whereas the left channel had a few mV of DC. Might be nothing, might be something.

Next I hooked up a dummy load (8Ω 200W in power resistors) and applied a 1kHz sine wave to the input. With my oscilloscope I quickly determined that the right channel was in working order. Left was out completely.

Since I already checked the major culprits of a dead channel, I continued to check the other transistors on the left channel circuit. The first one I tested (Q615, a 2SC2910 NPN transisor) showed a short between emitter and base.

A quick probe around showed no other damaged parts. Resistors showed their correct values or I would get values that indicate a capacitor getting charged. All other transistors checked out ok as well.

After taking out Q615 I put it in my component tester and instead of an NPN transistor, it showed up as two diodes.

This is what a working 2SC2910 transistors looks like on my tester: 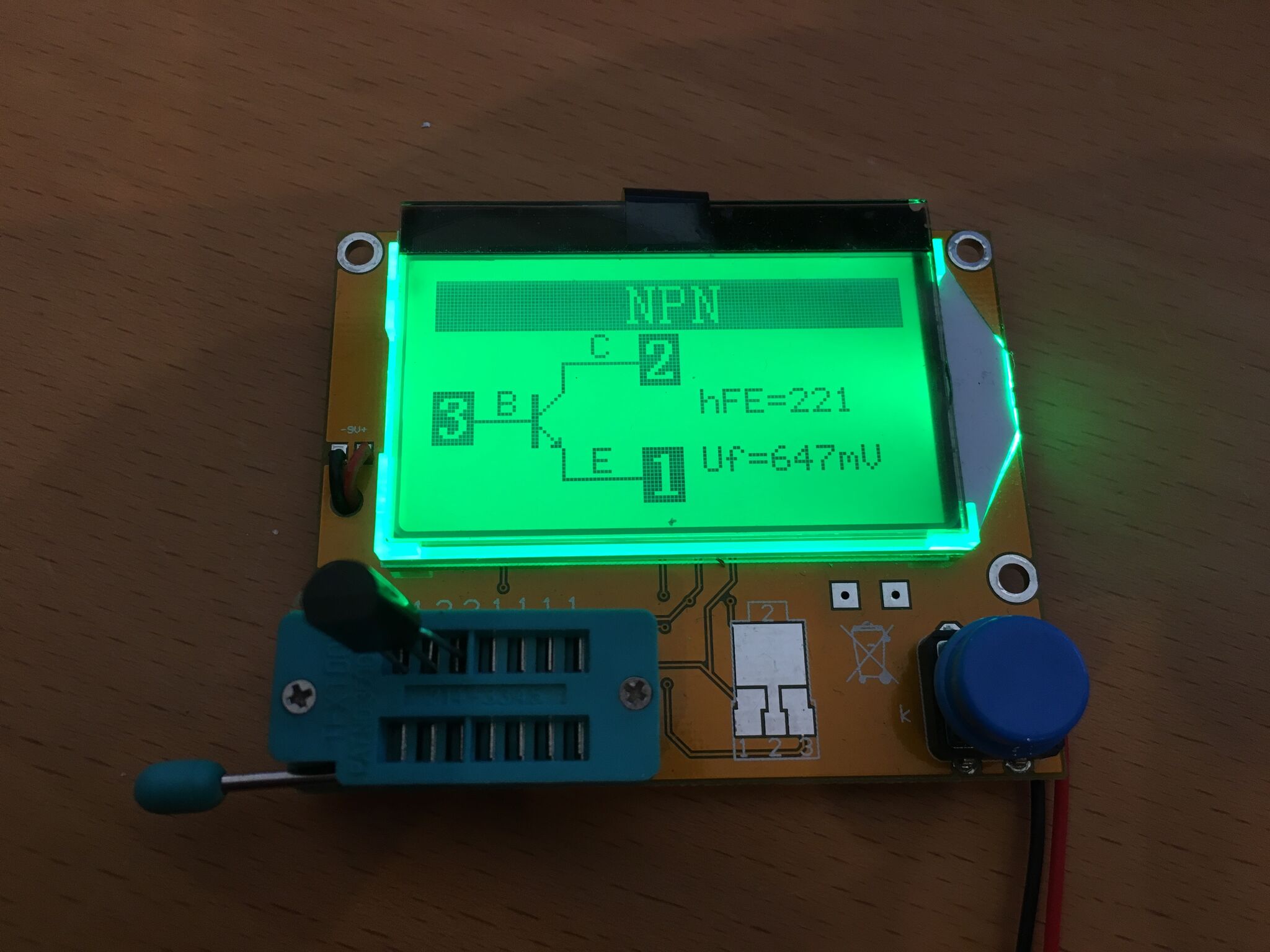 The shorted transistors was quickly replaced (a local supplier has the exact model in stock). This model has a removable bottom panel that gives easy access to the bottom of the PCB. 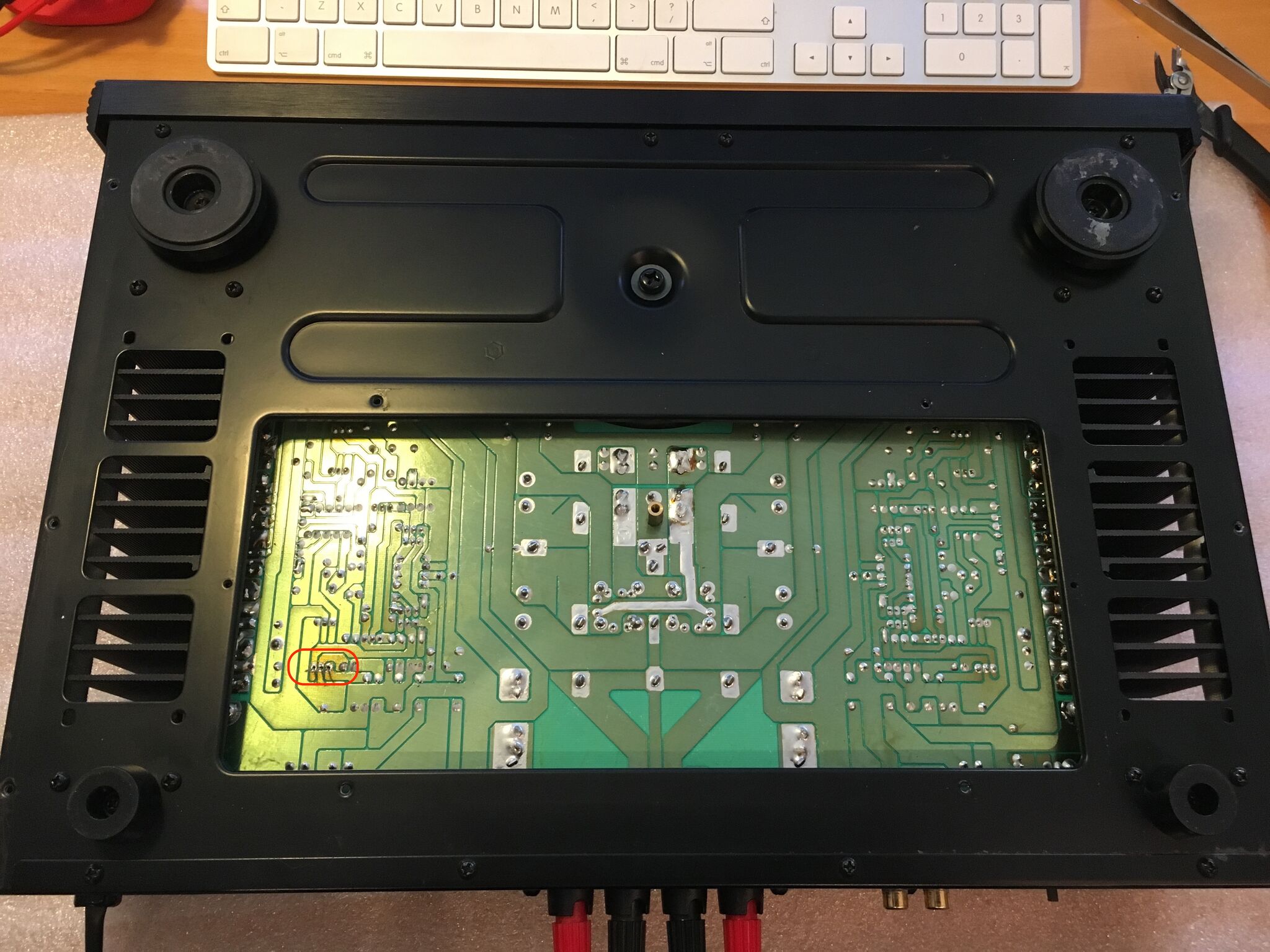 While I had the unit opened up on my bench I also to the opportunity to clean the insides using some rubbing alcohol and compressed air.

After verifying correct operation with a dummy load and my scope I hooked up pair of speakers and got to enjoy the beautiful sound of this Rotel amp.