I recently found a Denon PMA-560 Stereo integrated amplifier for sale with the remark that the left channel had stopped working. For a small fee the seller shipped the unit to me and this is the log of diagnosing and fixing the issue.

First, something about the Denon PMA-560. It’s a Stereo Integrated Amplifier from 1991 and is an analog design. I can really appreciate this design, using no digital IC’s or MCU’s.

As always I was able to find a trove of information on this unit at hifiengine.com, including a scan of (a German version of) the service manual.

I bought this Denon on Marktplaats, a Dutch alternative for Craigslist, with the remark that the left channel had stopped working. This could be due to a lot of things, but it will probably be fixable.

The first step with any repair job I do, before connecting it to mains and powering it on, is to open up the device and check for any obvious signs of malfunction: blown fuses, leaking or buldging capacitors, fried resistors or other burned looking things, disconnected wires, etc.

A first inspection showed that everything looked the way it should. There was little bit of dust, which was quickly taken care of.

Time to turn it on!

To be safe, I always start with, if possible, disabling the speaker outputs. The PMA-560 has a nice rotatary selector on the front turn the A and B speaker connectors on or off

Next, I hooked up my CD player to the CD input, turned the volume all the way down and powered it on. Nothing exploded. Yay!

Slowly increasing the volume revealed that both the left and right channel on the headphones were working just fine. I also tested the different inputs (omitting the phono input for now) and everything worked beautifully. Also the balance, bass, treble and loudness buttons worked as expected.

First, I connected two 8Ω speakers to the A-channel, and as expect no sound on the left speaker. Connecting the speakers to the B-channel, however, had the same effect as the headphones: great sound on both left and right channels.

The service manual (you can find it on hifiengine.com) contains the full schematic and it was rather easy to trace the single point of failure for this particular set of symptoms. 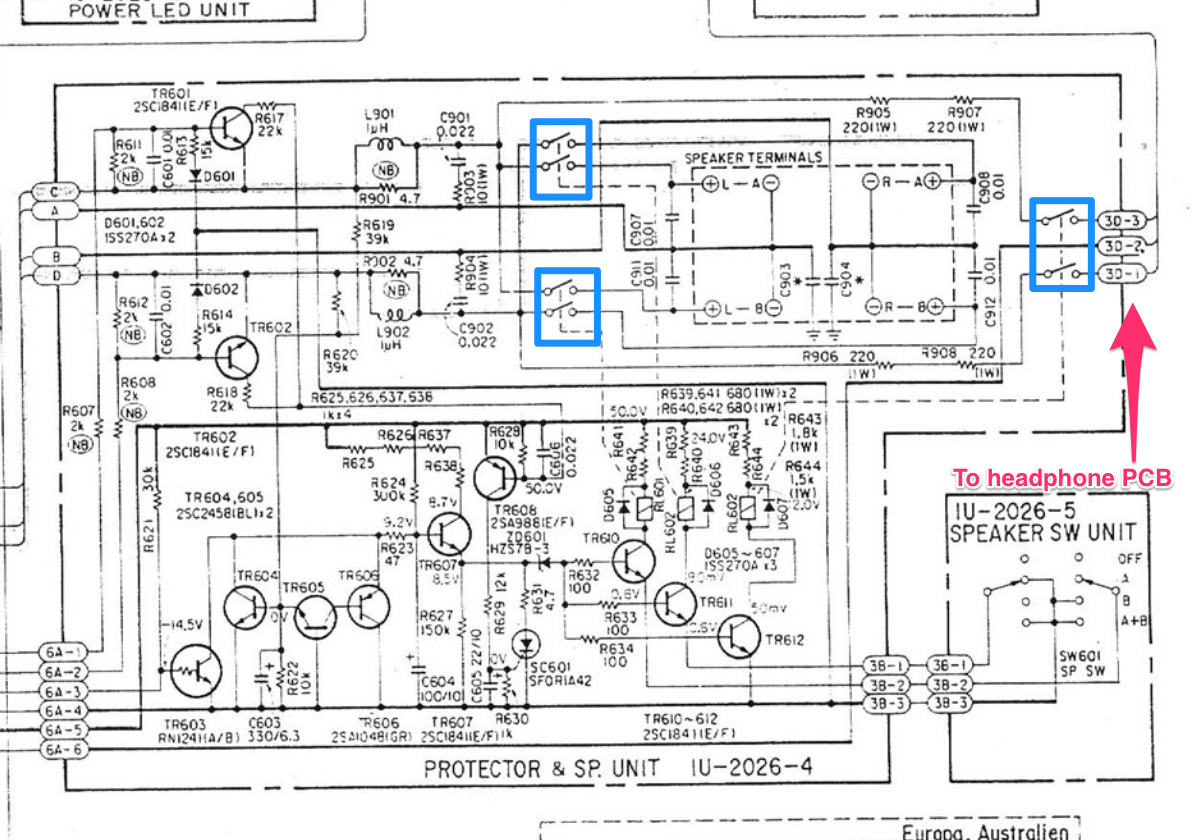 In pink I’ve indicated the wire connection to the headphone PCB, where the headphones are connected. In blue are the three relays that enable/disable each channel or headphones.

If you follow the lines you see that the left channel goes straight to the A, B and headphone outputs. The same goes for the right channel. The only point of failure between the common left channel output and the A-channel left output is relay, RL602.

It’s not surprising that after about 25 years of turning off and on again, the relay for channel A encountered a (probable) mechanical failure. I tried the speaker selector and the RL602 makes a distinct, heavier sound than RL601 for B-channel. 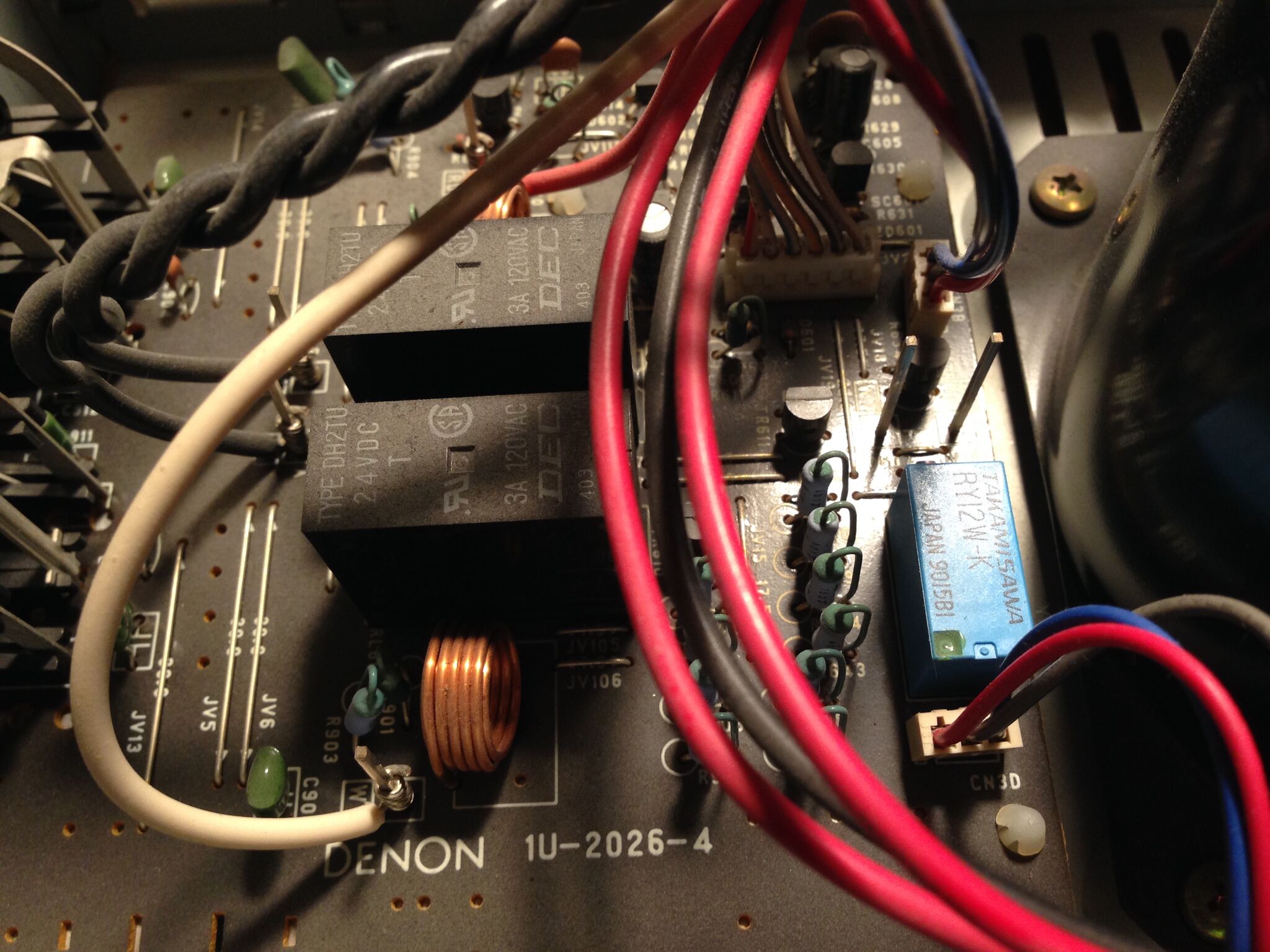 The fix is still pending. The relays are clearly marked and a Denon part number is specified in the service manual. Finding a replacement part was straightforward and a new relay in currently in the mail. In a few days I’ll replace the relay, which will most likely make A-channel fully functional again.

What I liked most about this repair is that is was very easy to diagnose. I didn’t even touch my multimeter or scope. Stay tuned for an update when the relay has been replaced.

Last week I diagnosed a Denon PMA-560 Integrated Stereo Amplifier. The device worked fine since its production in 1990, but had lost output on the left channel. My diagnosis, as you can [read in the previous repair log][repair-log] was a defect in the A-Channel relay.

There and back again

It sounds straightforward: just replace the A-channel relay. And it is. But does require a bit of work and careful deconstruction of the unit. 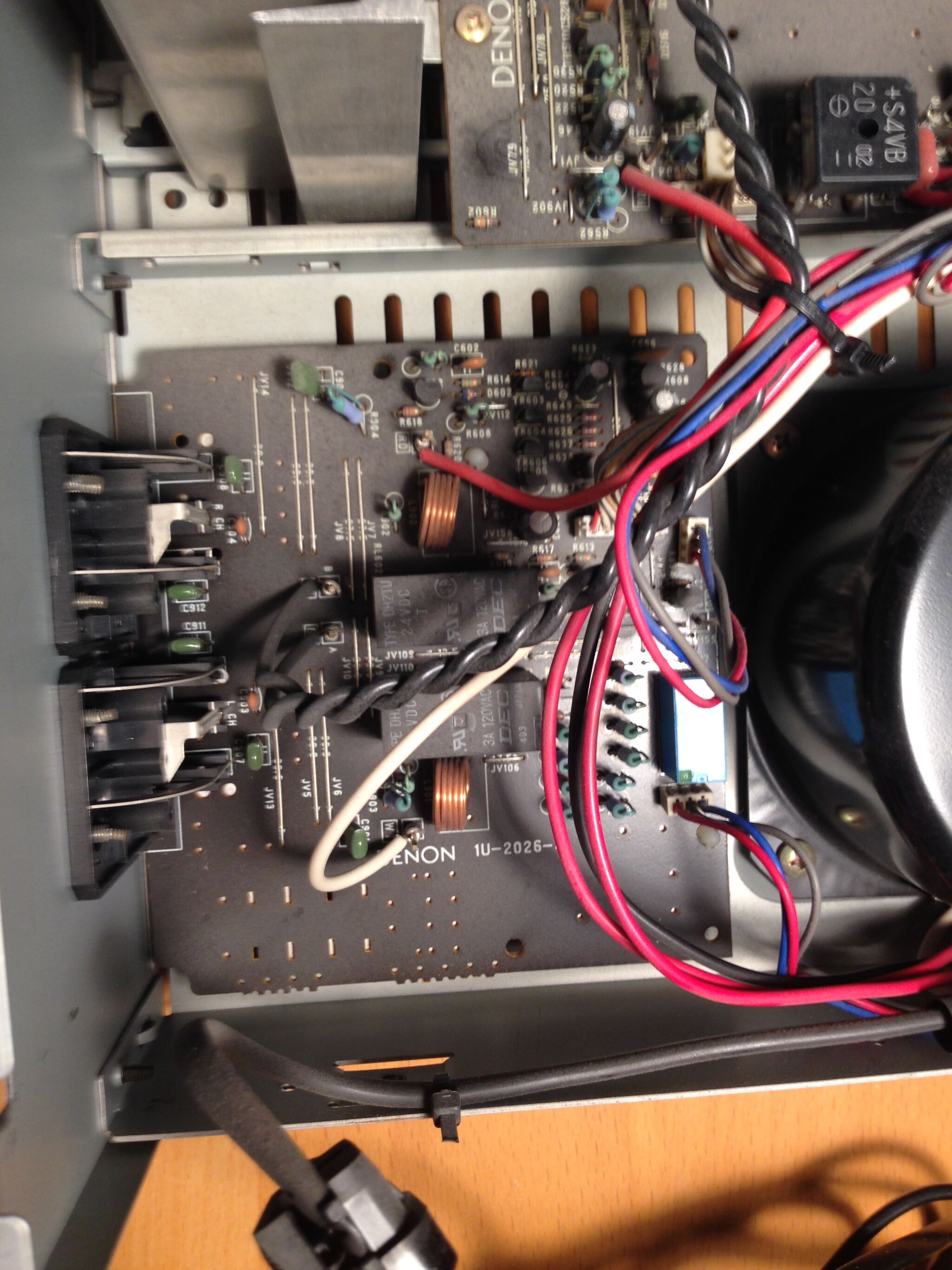 Those are the original relays. On the left you can see some metal pins connected to the PCB, those are the speaker terminals that you can see protrude out the back. This PCB is, on one side, firmly pressed against the back panel of the case and other the other side wedged in by the big transformer. The PCB itself is held in place by three white plastic pins. Can you spot them?

To remove the PCB, as I need to do some soldering work on the bottom side, I’d need to remove the back panel, which amounts to 15 screws. After that, the PCB comes loose and the soldering iron can be heated up.

The first problem is that the schematic in the service manual sports two RL602 devices. I’ve marked the three relays in green. RL601 and RL602 are for the A and B speaker channels. The second relay also RL602 in the schematic is for the headphones. Luckily this relay has different size and shape and is correctly marked as RL603 on the PCB silkscreen. 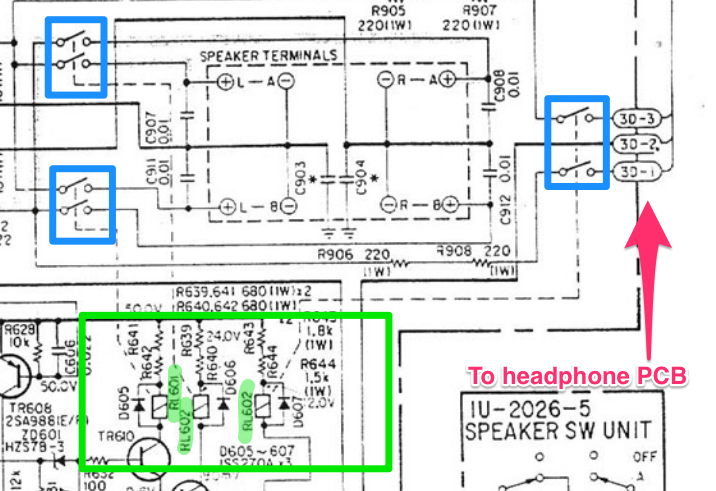 The relay has six pins, which are soldered to the PCB. Using my soldering iron and desoldering pump I first removed most of the solder and then wiggled the relay free while quickly heating up each pin. 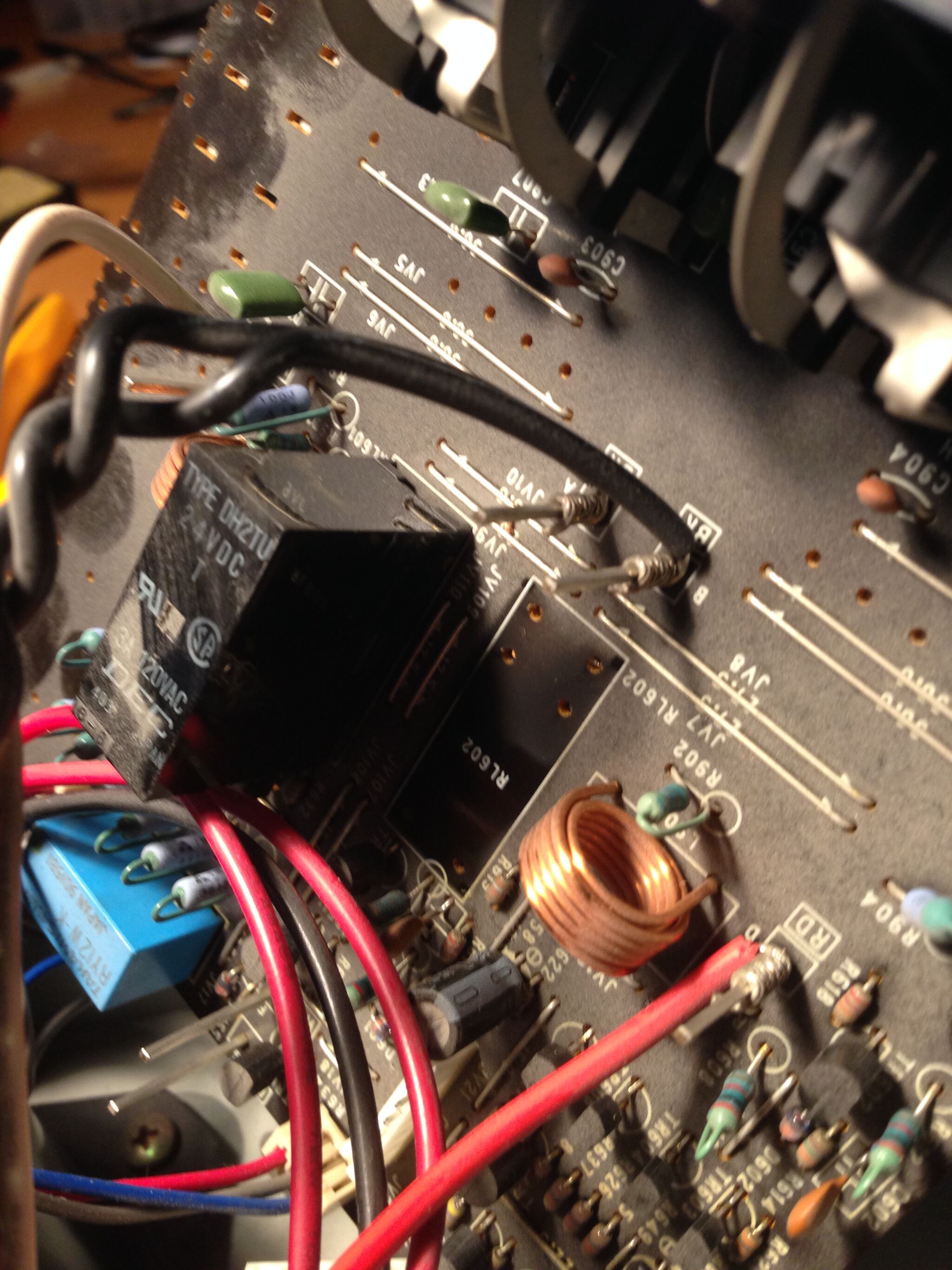 Next up, insert new relays and solder it to the PCB. 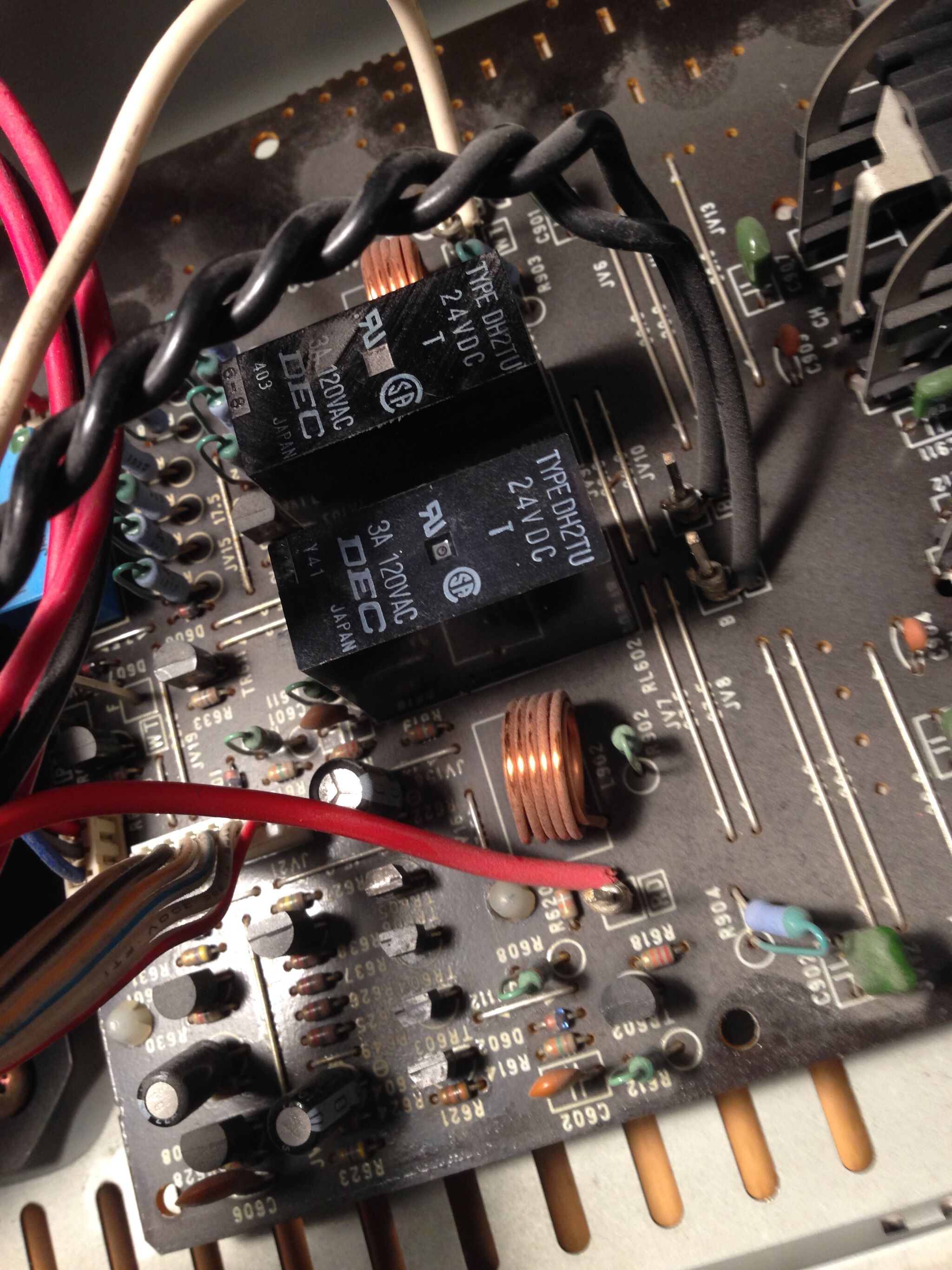 Here is the new relay in place. As you can see it’s the same make and model as it’s malfunctioning predecessor.

Let’s get the PCB back in, re-attach the back plate and hook the unit up to some speakers and input.

Yes. It worked. Turn on some music, select the correct input, select A-channel speaker output and slowly turn up the volume to the voice of Adele.

After this I did a double-check that I reconnected all wires and put the device back together (including the 15 screws on the back, not counting the three for the top cover). 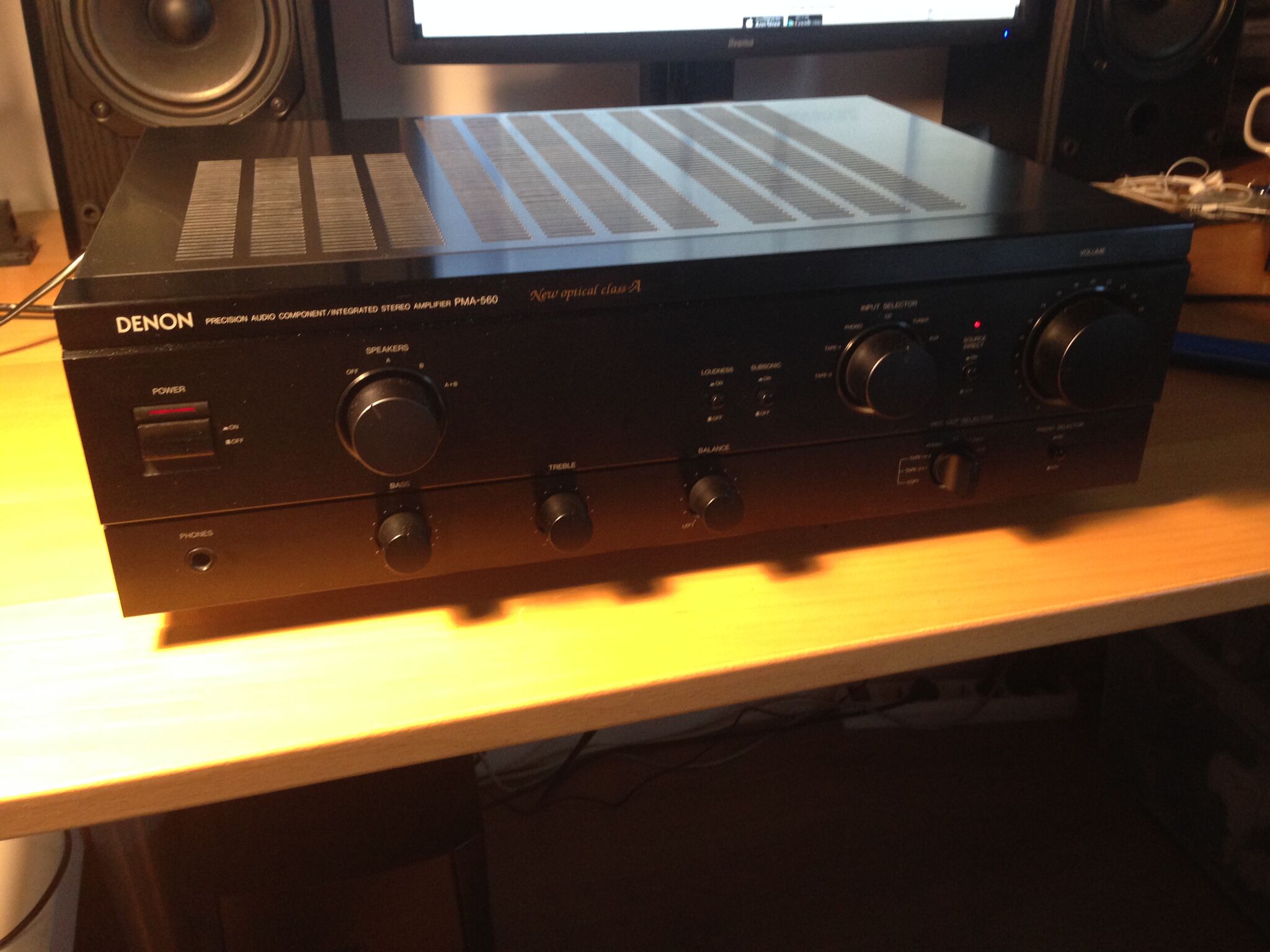