I’ve been working on a Marantz SR5200 recently that came in with the front-right channel not outputting any sounds. Well, sounds like project!

First step is to see how the problem presents itself and under what circumstances. I’ve learned not to blindly rely on the symptoms a seller describes. When a seller states that the right speakers does not work, it really means it does not work with my current settings and setup.

Again, let’s first make visual inspection of the insides of the unit to make sure there are not already some obviously burned or damaged parts - all looked fine. Let’s start with the head phones again to see if we get any output. Indeed, there’s no sound on the right channel. Next, speakers, same issue.

Now, I started playing with some buttons and testing different inputs. The issue did not appear when:

The first and second points were a big help for me. If ‘Source Direct’ is on, the whole signal processing is bypassed, and the right channel works fine. This rules out the power-amp stage as the culprit and points the finger to the DSP board.

Tracing back the schematic from what are the L+R channel outputs of the DSP board, I first encounter a IC725, a low noise opamp named NJM2068M. This opamp processes both analog L+R channels. Indeed, the left outputs and inputs measure ok, but the right channel is completely dead. On to the next IC.

Next in line is IC720, the CS4391 24bit/192kHz DAC, which converts the digital signal to analog. All signal processing is digital on this device, so it makes sense for this IC to be by-passed in direct-mode.

Doing a quick search for the CS4391 and Marantz it becomes clear this IC is a common cause of trouble.

To be sure I checked the analog input signal for the L+R channels as well. They end up in IC719. This IC does several things, but most importantly it has two ADCs to convert L+R channels to digital, and it features six DACs which are used for center, surround and subwoofer channels. Since the analog singal is coming in ok and the right surround channel is also working fine, I’m inclined to assume the digital processing of the right channel is also fine. 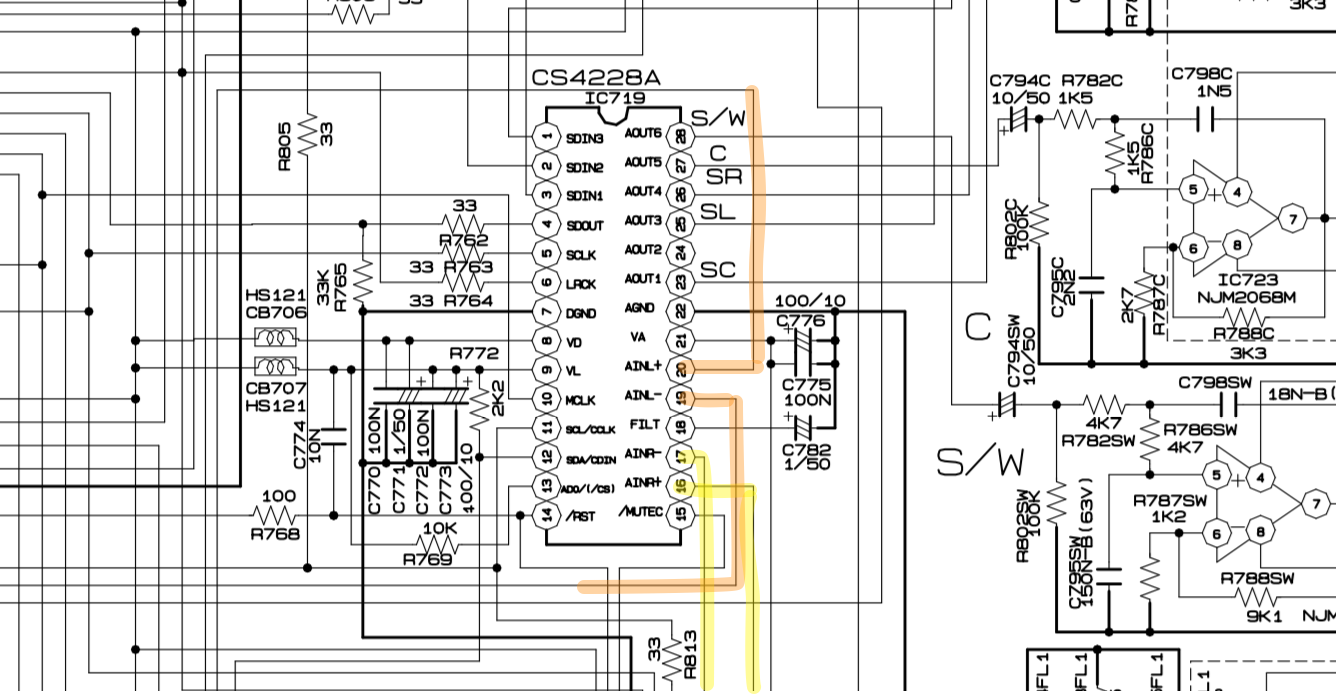 This in combination with the bad reputation the CS4391 has, I decided to replace the L+R channel DAC.

A replacement was quickly ordered and the TSSOP-20 IC replaced. Here’s the original IC (IC720) on the DAC board: 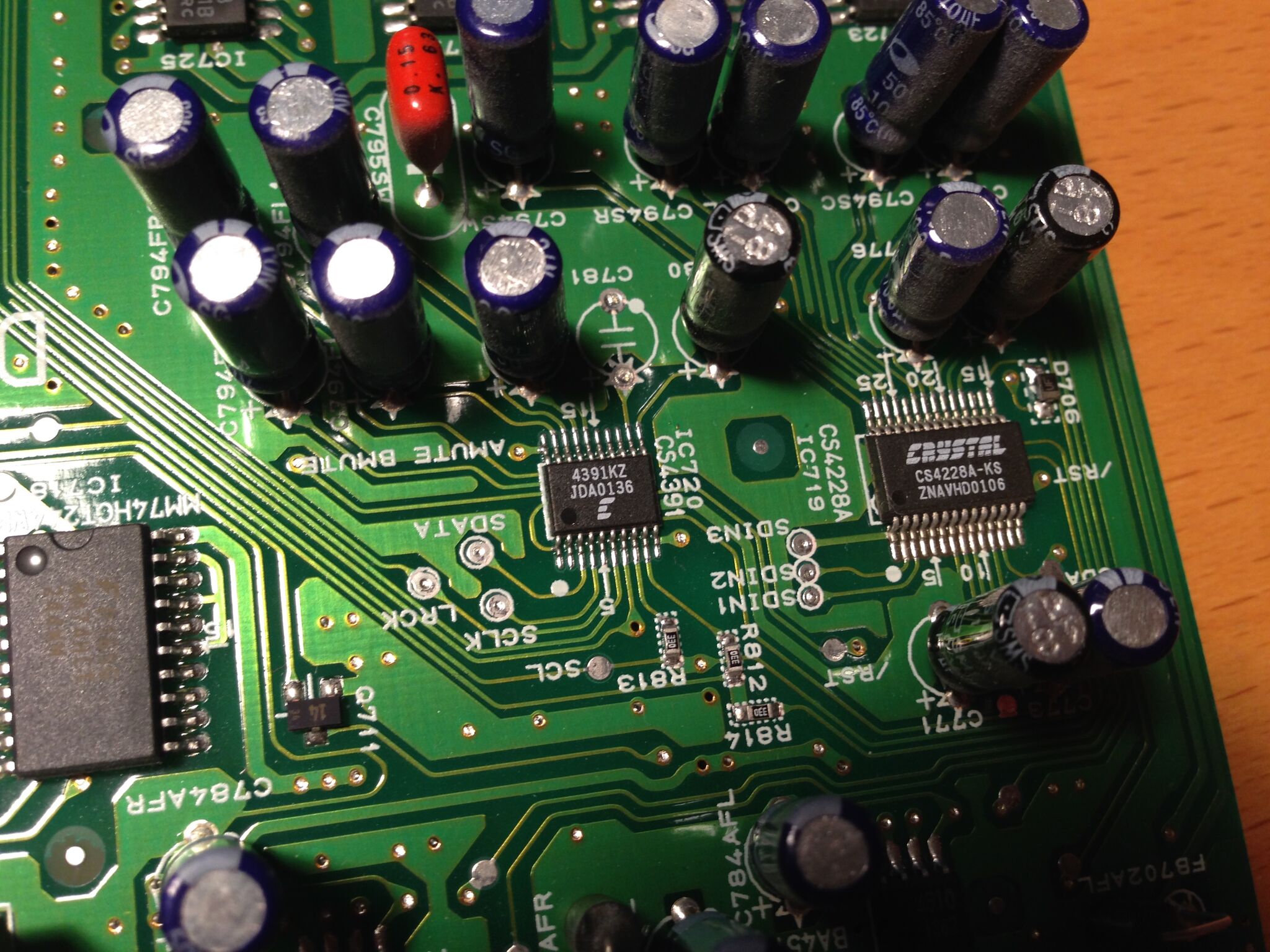 The replacement is really easy, don’t let the small size scare you. All you need is a soldering iron, ESD tweezers, solder wick and a flux pen.

First removal. With a bevel point heat up one row of the IC’s pins. Heat them up equally. Use the tweezers to left the IC off the PCB, repeat on the other side and the IC is gone.

Next, you might want to use the solider wick to remove any exces solder left on the pads. Be careful not to damage the pads, though.

Putting in the new IC is also not as hard as you might think.

Apply flux liberally on one row of pads, don’t be scared to touch the IC. Feed a little solder onto the tip of your soldering iron. With one hand use the tweezers to place the IC (make sure of the orientation!) and use the other to drag the soldering iron neatly across the pins. The applied flux will clean the pads and pins and make the solder flow properly.

If you did not add too much solder, the result should be neatly soldered pins. If not, use your solder wick to remove exces solder, optionall re-apply some flux and drag again until you get it right. It might help to have a (10x) magnifying glass at hand to inspect your handy work.

This is the end result: 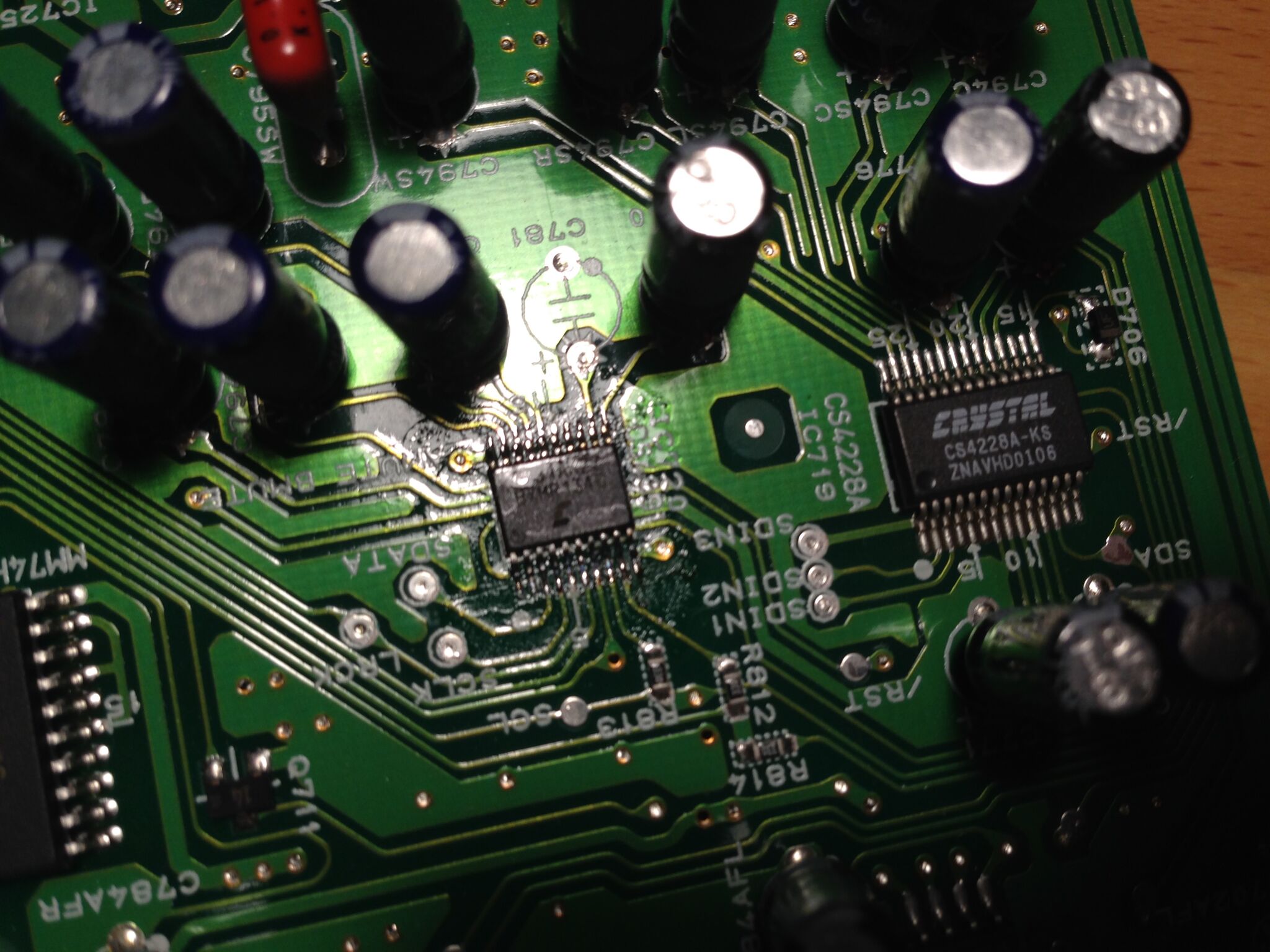 As you can see the flux leaves behind quite a mess, but it’s (electrically) harmless stuff, it just looks ugly. I really should be some flux cleaner.

With this done, I reassembled the SR5200 receiver and voilà, nice sounding music from all channels as you’d expect! 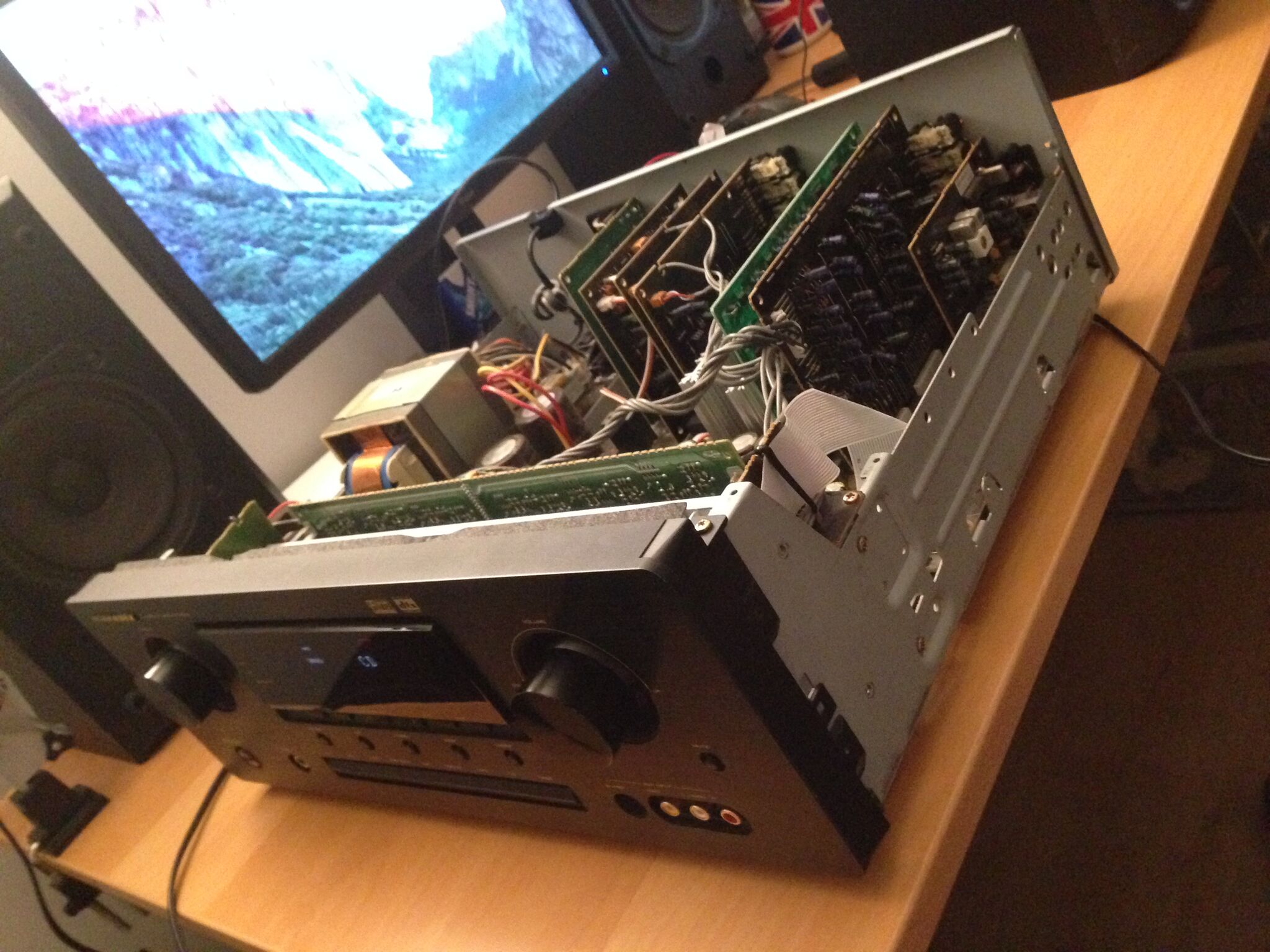 During testing I noticed the volume knob not registering every step, e.g. the volume would not be adjusted according to how I turn the knob. This is due to the rotary encoder (often erroneously called poteniometer) having some dirty contacts. I’ve orderd some Kontact 60 to resolve this - and update and photos on that later.